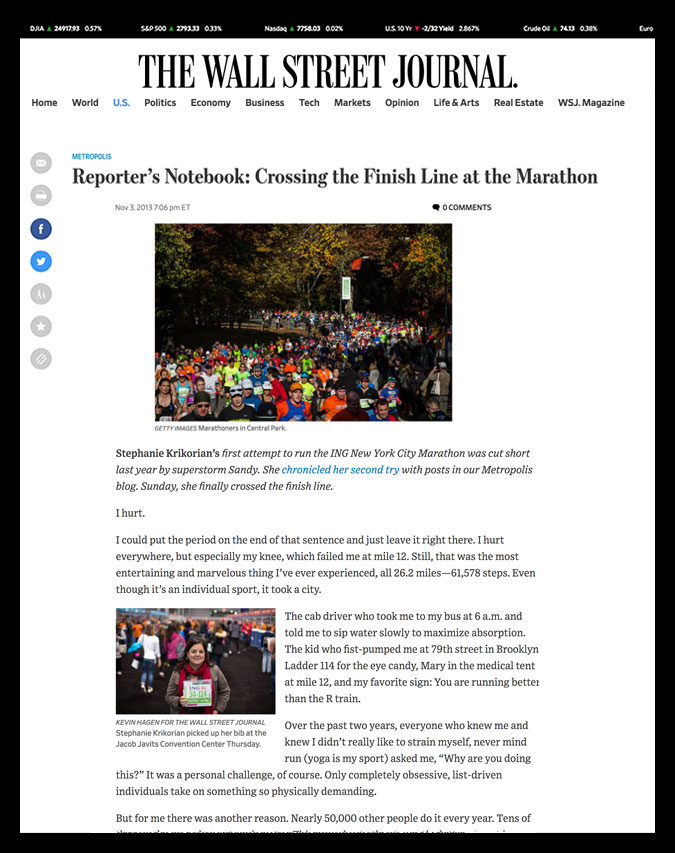 Reporter’s Notebook: Crossing the Finish Line at the Marathon

I hurt.
I could put the period on the end of that sentence and just leave it right there. I hurt everywhere, but especially my knee, which failed me at mile 12. Still, that was the most entertaining and marvelous thing I’ve ever experienced, all 26.2 miles—61,578 steps. Even though it’s an individual sport, it took a city.

The cab driver who took me to my bus at 6 a.m. and told me to sip water slowly to maximize absorption. The kid who fist-pumped me at 79th street in Brooklyn, Ladder 114 for the eye candy, Mary in the medical tent at mile 12, and my favorite sign: You are running better than the R train.

Over the past two years, everyone who knew me and knew I didn’t really like to strain myself, never mind run (yoga is my sport) asked me, “Why are you doing this?” It was a personal challenge, of course. Only completely obsessive, list-driven individuals take on something so physically demanding.

But for me there was another reason. Nearly 50,000 other people do it every year. Tens of thousands more clamor to gain entry. This year, due to the storm, the lottery to get in was only open for one month, according to the New York Road Runners, not the usual four or so. In that time, 33,000 people vied for 4,500 spots. I have always wanted to know what all the hype was about. I wanted to be a part of it. I always wanted to eat at Windows on the World too, and I never got to, so the New York Marathon (not just any marathon)—well, it just had to be done.

I understood the reason so many people wanted to do this race when I came flying (err, staggering) off the Queensboro Bridge and turned up 1st Avenue. That was the payoff, the money shot, the raison d’être. For just a few minutes, I felt like a rock star. The sea of happy, encouraging, sport-loving, city-loving people re-filled my tank for the last 10 or so miles.

Nicki Minaj songs and others with really explicit lyrics on my iPod helped me through too, as did the support and friends along the route. My coach’s final email ended with, “in the last half, don’t be a pansy,” so I tried not to be.

But mostly, as my brain and legs turned to mush and my knee had me hobbling around the unchartered 20-mile mark—after studying glycogen stores, high-tech equipment options, the route mile-by-mile, how many toilets would be at the start (1,700), how to handle injuries—it was the simplest most available tool in my arsenal that popped into my head and kept me going. The voice of one of my favorite yoga instructors, Jessica Bellofatto.

She always says, “Smile,” just after she suggests we contort into an insanely complicated only-for-super-human, most-often-agonizing pose. In yoga, the smile always works for me. So I smiled when my feet hurt. I smiled back when people waved and yelled my name off my shirt, even though I wanted to cry. When I felt broken, which I did, I just smiled. And it changed the game.

And then, before I knew it, I was into the final stretch, looking down at the yellow stripe on the road for Boston, painted alongside the traditional blue one. This run was about more than just a personal goal. This year, we were all running for Boston victims and Sandy victims too. That too made me keep moving as best I could, passing my parents in the grandstand (my dad tossed me a Canadian flag as I went by) for the last seconds of my race, just before I stepped across the two-years-in-the-making finish line.

Mine wasn’t what you would call a pretty run. It took me an hour longer than I had hoped. But my marathon was a lot like making sausage. You don’t want to know what went into it, you just want to savor the end result, which for me, was getting to feel like a badass.