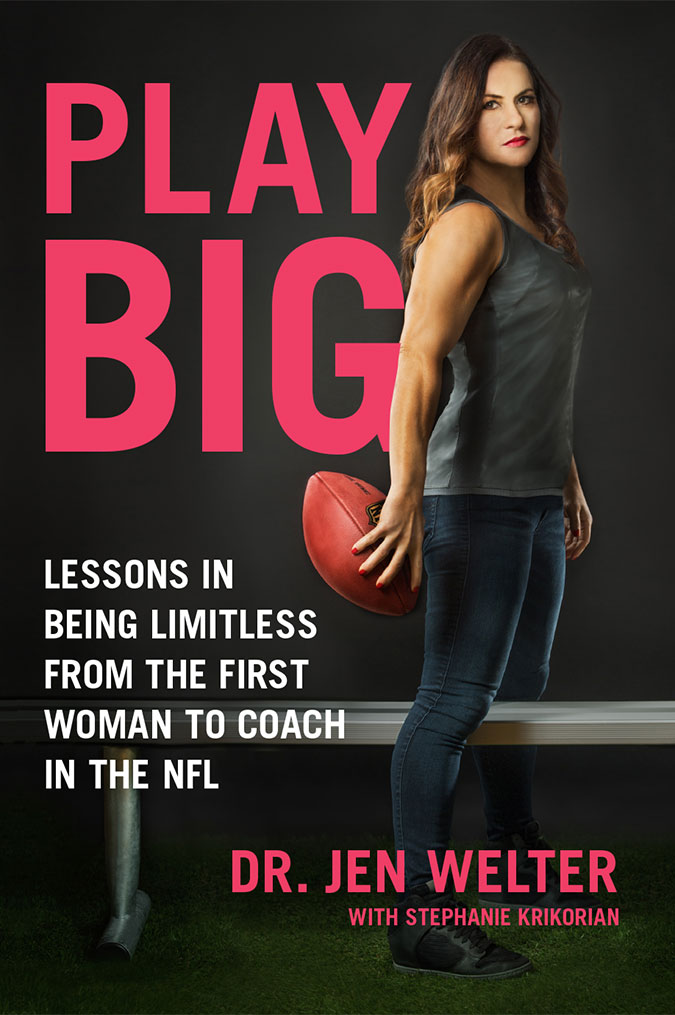 Lessons in Being Limitless from the First Woman to Coach in the NFL
Dr. Jen Welter with Stephanie Krikorian
Amazon Bestseller

Writing this book with Jen was an inspiring experience. I found myself constantly scribbling down her one line words of wisdom and pinning them up on my desk. “Success isn’t just talent, it’s fortitude,” is one that keeps me going when I start to lose steam.

When Jen Welter became a linebackers coach for the Arizona Cardinals in 2015, she was the first woman to ever break the glass sideline of the NFL. In Play Big, Welter reveals the grit that it took to be a trailblazer in the ultimate boys’ club.

Pre-NFL, Welter was an undersized, underestimated athlete who made sacrifice after sacrifice to achieve her football dreams–rising to the top of women’s football leagues and eventually daring to play against men twice her size. Play Big lays out how she succeeded despite the odds, through force of will and determination, revealing the wisdom Welter gained over countless setbacks and challenges. With vivid wit and candor, Play Big will coach you to do the same–whatever your obstacles might be–while translating Welter’s hard-earned advice for cultivating true perseverance and toughness.

“Stephanie Krikorian worked as my writer, but so much more. I loved that she jumped out her seat and chased me down at an event to say, “You have to write a book and I want to help you do it,” but also I appreciated that she helped me navigate the ups and downs of the proposal process and publishing world. With each no, she always had a now ready: “Here’s what we are going to do next,” she would say, even when that meant starting from scratch and writing something new. I can’t thank her enough for sticking with me and believing in me.”—Dr. Jen Welter

“… Jen Welter’s enthusiasm about the game, her expertise, and being able to teach what she knew, I thought was very evident in the first meeting. That’s why I hired her. Anyone reading this book will be inspired by her drive and learn from her journey.”
―Bruce Arians, Arizona Cardinals Head Coach

“…Jen is a force and is one of the most qualified people I know on change.”
―Nancy Lieberman, Sacramento Kings Assistant Coach, Basketball Hall of Fame Member

“If you’re thinking about taking a road less traveled, then Play Big is the book for you!”
―Warren Moon, Pro Football Hall of Fame Quarterback, 2006

Dr. Welter got a ton of press (and continues to!) following the publication of Play Big. Good Morning America, Sports Illustrated, Harry Connick Jr.’s talk show, Glamour, and more. Some of her appearances are listed below.

Out of Bounds: Jen Welter on Breaking Barriers in Football
NPR