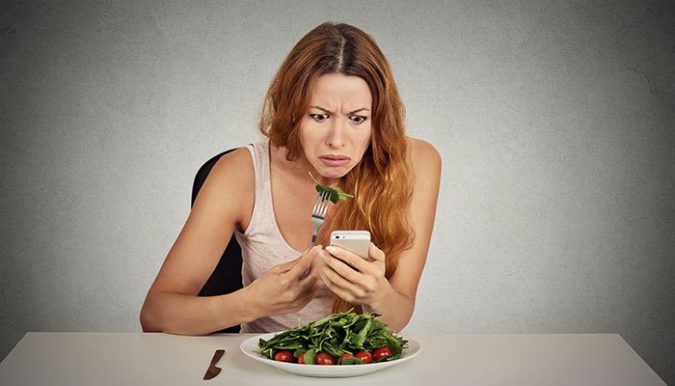 The Mid for ScaryMommy.com
by Stephanie Krikorian

Back when Facebook was new (to me) I was sitting in a restaurant in Paso Robles when I got an alert that a photo of me had been posted. I had no idea people had the ability to post on my personal page. I almost choked on my cabernet in horror. The camera had captured me at a party on the roof of my then apartment in Manhattan a week earlier wearing a flimsy summer dress. I was seated with my legs spread, and you could see up my skirt with my maximum-sized-looking thighs flattened to the chair. My mouth was open in an ugly way, as I was about to devour a giant fried chicken drumstick. To add to the hideousness, I was sitting beside an emaciated waif-of-a-thing who looked in desperate need of a sandwich. I couldn’t have looked worse.

I frantically punched at the phone trying to figure out how to untag myself, and when I couldn’t, I told my friend we needed to leave the restaurant and get to a computer tout suite so I could remove from public view what was unquestionably the worst picture I’d ever seen of myself. I untagged (though couldn’t remove the photo from my friend’s page, obviously) and executed every blocking mechanism known to Facebook to ensure only I had control of my page forevermore.

The tag was only up for an hour, but the implications were everlasting. What’s the etiquette for posting and tagging? I’ve tried to implement my own standards and wish everyone else would comply too. I’ve had parties where I’ve been clear: This is a no-Facebook posting event. I’m on high alert every time someone pulls out a phone and points it in my direction. And I’m an ultra-hyperaware tagger: at a reunion cocktail gathering with former colleagues, someone said, “Stephanie, check us all in!” My first question for the crowd: “Does everybody’s wife or husband know they’re out drinking right now?” Isn’t that just the polite thing to do, to make sure everybody is okay with being a part of a post or photo-op?

That first horror show photo also led to me to ask a couple of things: Why the hell must people of my age post their faces over and over and over again, and what’s the etiquette for abstaining and tagging? There’s something sad to me about the repeated need for validation through great pictures of oneself. We get it. You look great, in all 72 shots in the same bathing suit on the same boat. I completely get why young people post; that photo-of-everything culture is ingrained. They grew up with it, but we did not. My first camera was a Polaroid. Capturing a moment was a treat and a memory of an important day. These days, we compromise being present to pose at every single solitary, standard, run of the mill, regular dinner, taking ourselves out of the moment. And when you snap, shouldn’t we all have choice about participation?

I realize by writing this I will have, like, three friends left, but I’m frustrated by the pressure of forced photos. I think some tagging and photo-taking etiquette lessons are in order, since I find I am in constant search of a delicate way to say “no” to the camera-happy friends whose acquaintance I’d like to maintain.

My most recent objection was violent. A group of buddies from Toronto were visiting. They understandably wanted to capture their first visit to the Hamptons (which is where I live). Plus, we hadn’t all been together in years. I was resistant to the first snap, but I acquiesced in the spirit of friendship and lobster rolls, insisting, however, that I maintained the right to refuse Facebook posting. At the next stop, I begged not to be in the photo. I lost. The next photo (taken under duress) was posted, but I insisted I be cut out. By dinner the second night, my response to a photo request was blunt: If you snap one more fucking picture of me, I will smash your phone and I won’t feel one ounce of bad. The friendly route hadn’t worked. The insane-girl-who-hates-her-photo-taken tact did the trick: There were no more photos. We had a good laugh about punitively posting that they were in the Hamptons so that their friends would be jealous, and that was funny. But in general, it feels like Facebook exists to show that our lives look better than they might be, and remember people: Comparison is the thief of joy. Everybody doesn’t have the same desire to post and be tagged.

Simply put, there’s got to be a better way. Not everybody agrees, though. I recently watched a group of strangers selfie-up, with their backs against a wall. Had they flipped around, they would have caught the water, the sunset, the band and the cool lights. My point is, it was all about them, not the moment. One woman instinctively tried to jump out of the shot. Her friend used an iron grip to pull her back in, forcing her to pose. The poor woman said three times, “Please, I hate my photo being taken.” Her friends said, “Too bad.”

Instead of a nonstop photo-exemption strategy, here’s some tagging and snapping etiquette we should all employ:

• Since photo posting is a survival-of-the-fittest sport for the confident and super pretty, and nobody puts a crappy photo of themselves up (but they’ll do it to you with zeal), assess everyone in the photo with the same scrutiny, being sensitive to their sensitivities. Retake that photo if needed to ensure you all look good; after all, a rising tide lifts all boats, or something like that.

• Be a pal and let the most photo-sensitive person be the decider of the shot.

• Always ask before you tag anybody for anything. We’ve all canceled a plan with a fib, and we’ve all skipped out of work for a liquid lunch here and there. Don’t bust a sister on Facebook.

• If someone truly doesn’t want the picture posted, abide. Instead, email it around and enjoy it privately.

• Let the photo-haters sit on the end of the crowd shot. Then if they wish, you can edit them out and still post.

• Try to enjoy the moment instead of capturing it all the time to prove you have a breezy, fabulous, happy, popular life. (Okay, now I have, like, one friend left.)

I love social media, so writing this might sound hypocritical. I treat my Face-Twit-Insta life like speaker’s corner. I stand on my virtual soapbox and say what I think. My posts might very well irritate my friends. I like participating in debates over world issues and TV shows, and I genuinely like knowing where my friends are eating or traveling to at any given moment. I like seeing what they are drinking. I do hate pictures of cats. I like trying to make people laugh. (That’s inoculation for all of you who are seething: This is a humor essay!) I like capturing a cool and organic moment. But, I choose it all with care.

Like a luxury good, too much of one thing diminishes its worth, and then it’s just noise. I like the idea of saving our history out there on the World Wide Web. I just don’t know why my face has to always be in it. I want control of my pages. If you are somewhere cool, snap it. If you want to post 800 pictures of yourself, knock yourself out. You have the right. But I do ask that you let me step out when I want to without a hassle, and don’t tag me when I’m eating fried chicken.